Statement of the Chair of the UN Road Safety Collaboration

In the weeks leading up to this World Day of Remembrance for Road Traffic Victims, not a day has gone by without us hearing disturbing news of lives shattered by road traffic crashes: from major bus crashes in Kenya, Nepal and Peru, to just yesterday – the message from a father who lost his two-year old daughter when she was struck by a car as she ran after a ball.

My heart goes out to bereaved families and friends whose loved ones have been killed on the world’s roads this year.

The Decade of Action for Road Safety gives governments – and all of us – a platform to put concrete measures in place to prevent this loss of life.

I am encouraged by the actions being taken.

Countries like India, Mexico and New Zealand are assessing the state of their roads; New Car Assessment Programmes are highlighting gaps in the safety of vehicles; campaigns to prevent drink-driving are on-going in Brazil, Cambodia and Viet Nam, and to promote child car seats in the Russian Federation and motorcycle helmets in Yemen; and countries such as Mozambique, Romania and Thailand continue to improve their trauma care systems.

Despite progress, the WHO Global status report on road safety 2013 reminds us that much more is needed and that laws and their enforcement need to be strengthened everywhere if we are to have roads that are safe for all.

Let’s continue to work together to achieve the Decade’s goal of saving 5 million lives.

The Centre of Consultancy for Road Victims – CCVR Romania, has carried out a series of activities reunited under the aegis of the Decade of action for road safety 2011 – 2020, on the occasion of World Day of Remembrance for Road Traffic Victims, marked this year worldwide on November 18th (third Sunday of November).

The National Road Safety Convention is a periodical debate, dialog and action platform, for the implementation of National road safety strategy, which envisages, according with the European objective appropriated also by Romania, the reduction by 50% of the number of road traffic victims at European Union’s level. The first edition of National Road Safety Convention took place on November 15th, 2012 at the House of Parliament. Through their presence and their speech, the attendees have manifested the desire to decrease the number of road crashes, have emphasized their concerns and the results obtained, and the representatives of Ministry of Transport and Infrastructure, Ministry of Regional Development and Tourism, Ministry of Health, Ministry of Administration and Interior, Ministry of External Affairs and their subordinated structures, along with the Road Police Brigade, have promised full support in order that the National road safety strategy comes to life. Through the speakers we enumerate the representatives of the Ministry of Interior, of Ministry of Health, of “Alexandru Ioan Cuza” Police Academy of Bucharest, of the Romanian Association of International Road Transports and of the “C. Rădulescu Motru” Institute of Philosophy and Psychology belonging to the Romanian Academy. We have been honoured that the representative of Embassy of France to Bucharest had joined the debate, making recommendations based on the experience from the European Union’s member countries.

On this occasion, there  was launched the “Drive cautiously, save a life” advertising campaign created by Publicis advertising agency, partner of the event, having as purpose making the drivers aware of the fact that all road crashes victims are innocent people. The campaign launched on the internet has had an impressive impact on the specialty platforms and social media sites, demonstrating once more that the professionalism and excellence are the essential elements which contribute to a successful campaign, especially on such significant issue as road safety.

On Saturday November 17th, 2010, in the Constitution Square from Bucharest took place the fifth edition of annual event “Bloody Asphalt”, event for the commemoration of the road traffic victims from Romania, which joins the global initiative “Light of Hope”, carried out also at European level by the member organizations of the European Federation of Road Traffic Victims – FEVR. A priest officiated a religious commemoration service and the participants formed a human domino within a cross shaped out of lighted candles.

The Centre of Consultancy for Road Victims – CCVR Romania, is a non governmental organization acting for more than 4 years in the road safety domain in Romania, representing the interests of victims and their families, promoting and defending their rights, offering consultancy and assistance – juridical, technical, medical, social, psychological, etc.

Member of the European Federation of Road Victims – FEVR and of the Global Alliance of NGO’s for road safety, signatory of the European Road Safety Charter, CCVR Romania carries out its activities and develops projects under the aegis of Decade of Action for Road Safety 2011 -2020, together with its partners, through which we enumerate: The Road Police, the “C. Rădulescu Motru” Institute of Philosophy and Psychology belonging to the Romanian Academy, The Romanian Automobile Association, the Bucharest Metropolitan Library, the Romanian Union of Publishers, The International Federation of Educational Communities – FICE Romania, the Association of consumers’ protection  – ASCOR. 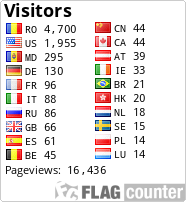